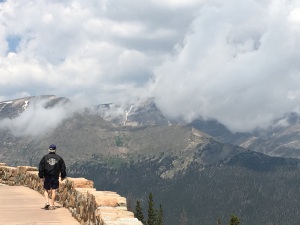 As difficult as it was to leave Custer and the Wagon Wheels West RV park, it was time to move – and we had good friends in the Denver area with promises to visit. One of the best parts of this new life style is the ability to connect with friends we haven’t seen in way too many years.

By way of a quick preview – we left Custer bound for Greeley, CO, then to Denver, then back to Greeley, followed by an overnight near Pueblo on the way to Creede, CO.

Greeley RV park was a ‘rest stop’, service stop and close to the eclipse path.  It may seem odd, but schedules (ours and friends) made for two separate Greeley stops with a week in between in Denver.  Perhaps as important as viewing the eclipse, we finally got a Dish TV system installed and working after multiple attempts at other stops.  This was not a trivial thing, as the NFL season was about to start – at least the pre-season games. So, we learned at bit about Winegard antenna switches and Wally boxes!

What the antenna looks like with the dome cover removed…..

During the first Greeley visit, we made a trip to Estes Park and the Rocky Mountain National Park. As luck would have it, our friend from back east was on his way to Sturgis for the bike rally and stayed with us for a couple days – including the trip to Estes Park.

Sad to report that we lost Chuck to an apparent heart attack just days later making for some very bitter sweet memories. 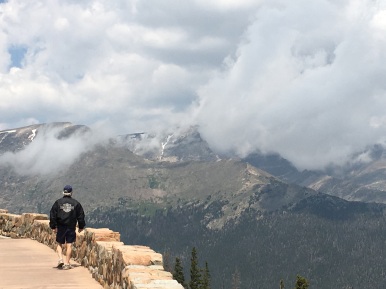 For our stay in Denver, we were lucky to get a spot in Cherry Creek State Park. It was a beautiful location and we would have stayed longer if space was available. A wonderful dinner provided time to catch up with our friends Mike and Sharon.  Thanks so much!

There was also time for day trips into town which included tours of the Denver Zoological park…. a beautifully designed and maintained facility with an incredible diversity of wildlife. 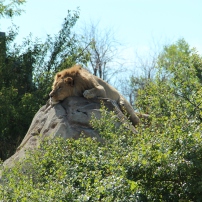 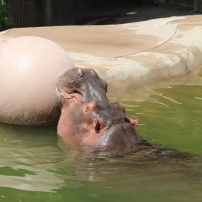 …and the Botanical Gardens were stunning with so much in full bloom. 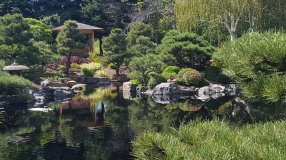 After a week in Denver, it was back to Greeley for Eclipse day. We were just south of the path of totality but got a full 98% show!

We left Greeley headed for Cottonwood Cove RV park near Creede, CO, but made an overnight stop at Lake Pueblo SP to shorten an otherwise very long day drive. The park was another example of wonderfully maintained facilities by Colorado Parks and Wildlife department – easy pull through sites, and a beautiful location.

Denise decided to practice some ‘mountain climbing’ and headed up the adjacent slope…. Look close and you will see her waving from the ‘summit’.

Our stop in Pueblo made for a shorter day’s drive to Creede, and left enough time to make a side trip to the Great Sand Dunes National Park & Preserve. What an amazing natural feature! 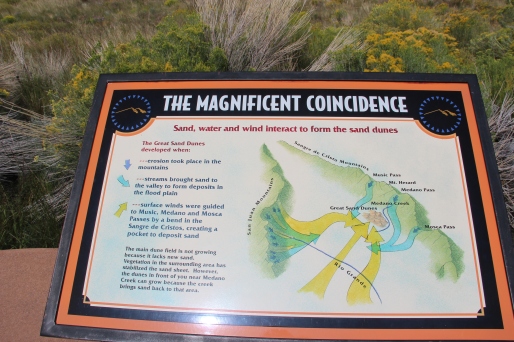 It was a bit of a hike from the visitor’s center down to the dunes and the Little Medano Creek that, in part, creates and maintains the dunes…..  Lacking both time and energy, we passed on hiking to the top, though many folks were doing so………and we were hesitant to push us ‘still flat-landers’ too hard at the 8,500 ft elevation.. 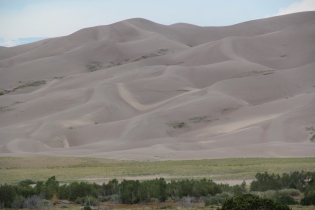 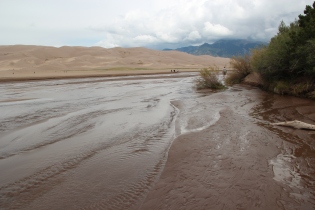 We arrived at Cottonwood RV park to be greeted by a small herd of Big Horn Sheep… seems they come down from the surrounding cliffs quite often, and we were to see them several times during our stay. A few days later, two rams joined the groups. 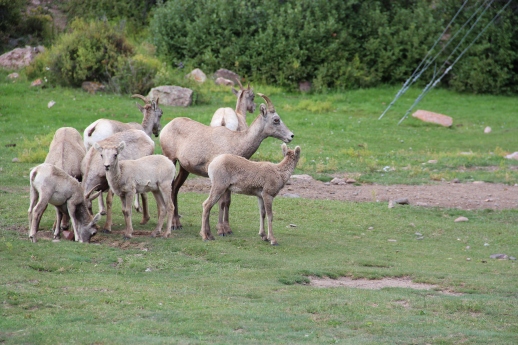 A good chance we’ll go back to this park. It is a spectacular location, friendly staff and so much to do with the town of Creede only a few minutes away…

…and Denise was introduced to Apple Caramel Martinis – a gift to all the women around a nightly campfire. I think it was a winner!

It should be noted that the splendor of the location was not with costs. Cliffs are not friendly to cell and internet connections, so this was our local phone booth …. 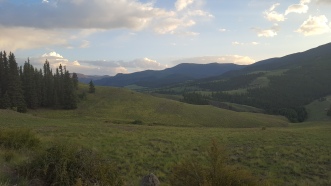 … a short drive from the park and a nice place to watch the evening sunset.

In addition to the sheep, we had horses in the adjacent pasture, and were serenaded at night by nearby coyote families.. 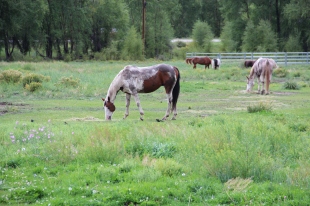 The Rv park was right on the banks of the Rio Grande river. We made the trip up canyon from Creede to the headwaters. Right by the park, we enjoyed the scenery, hiking paths …

… and some good fishing! It’s been a few years since I’ve fished, but managed to land a 14 inch or better Rainbow …….. 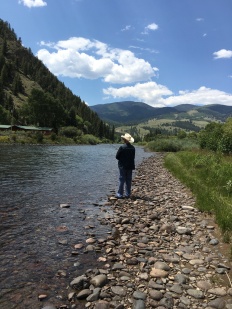 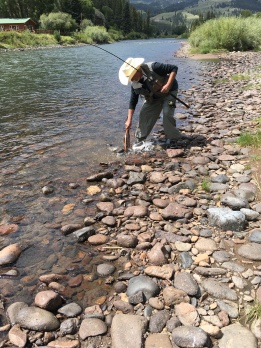 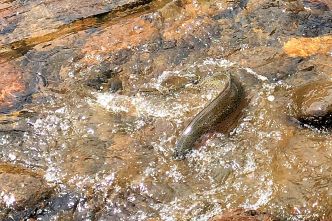 We met more new friends – who had been here a while and helped with the fishing. Look forward to crossing paths again – perhaps even at Cottonwood….

The town of Creede was a mining community and remnants of that activity can still be seen by driving (4-wheel advised) up the canyon road.. 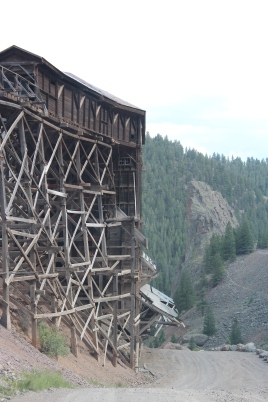 It was here we found the headwaters of the Rio Grande though we didn’t follow the 4-wheel road all the way to the top..

We are now safely settled at the Mesa Verde RV park after a drive down by way of Wolf Creek Pass (10,800ft) with several miles of 7% grades – up and down – it was interesting and provided a good test the motor home’s power and engine brakes.

It also provided for some beautiful scenery 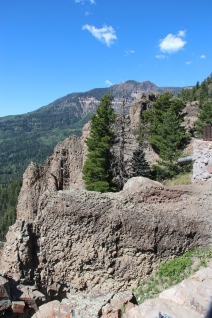 The RV park is located between Durango and Cortex, and just a mile or so from the entrance to the Mesa Verde NP. We plan to spend the month visiting the Park and surrounding early settlements of cliff dwellings and related historical sites. It is a great place to take a break from the traveling for a bit……. 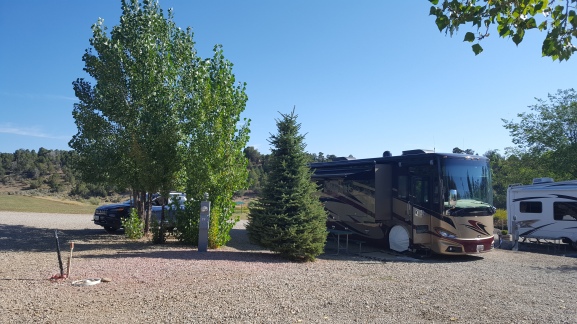