J. R.R. Tolkien’s adventure tale, ’The Hobbit’ had the alternative title ‘There and Back Again’.  All who know (and love) the Tolkien tales, will remember that Bilbo indeed made his adventure trip but once and ultimately left middle earth sailing for Valinor with the elves.

Many of us who seek adventure on sailing ships are unlikely to encounter the extreme events found in the pages of The Hobbit, or the sequel – ‘Lord of the Rings’. Certainly we don’t encounter goblins, giant spiders, ents or elves – though it may sometimes feel so. And, with good luck, we get to repeat our travels many times. Yet, there is a down side to that.

If you are like most sailors, you find yourself sailing to familiar destinations repeatedly, season after season. Familiar is nice. We know the time and distance factors and constraints of weather. We know how much company we’ll find, or not, in our favorite anchorages. Many make these destination choices as part of a club program.  Single-handing or cruising outside of club sanctioned events offers more freedom to sail to the wind and explore new places, but can miss the social side of sailing – and some really good parties!  But, don’t you frequently feel a strong urge for greater adventure on the water?

Enter the DelMarVa rally, the Bermuda Ocean Race, the Caribbean 1500 and other similar distance and open ocean events. These are organized to satisfy our desire (need) for greater adventure and experience.  They are designed to challenge our sailing skills with safety in mind. Venturing further with the expectation of experiencing a wider range of sailing conditions, and to see ‘what’s over the horizon’ promises to satisfy that urge for greater adventure. Depending on your particular level of tolerance for risk, these are easy steps to take in the company of like-minded sailors. Stretching further to ocean-crossing destinations is generally a step too far for most of us, but always something to day-dream about or even plan for whether realistic or not.

In a few short months (June 2013), the promise of an adventure opportunity awaits. Another DelMarVa Rally is being organized by Spinsheet magazine and others. In 2011, over two dozen boats ranging from 30 to 44ft completed this circumnavigation of the DelMarVa peninsula going clockwise from Annapolis through the C&D Canal, off-shore near Cape May to Hampton, Va and home. Next year we will take the reverse course. The seminars and meetings in preparation for this adventure are underway now, so follow the plans at http://www.delmarvarally.com/ .

If like me, you’ve winterized your boat and are done sailing for the year, planning for next season is what we do to get our sailing ‘fix’ through the cold months.  Our luckier friends are south of the Carolinas by now and finding warmer climes as they head for the Keys or beyond. Fair winds to all, and see you on the water next season! 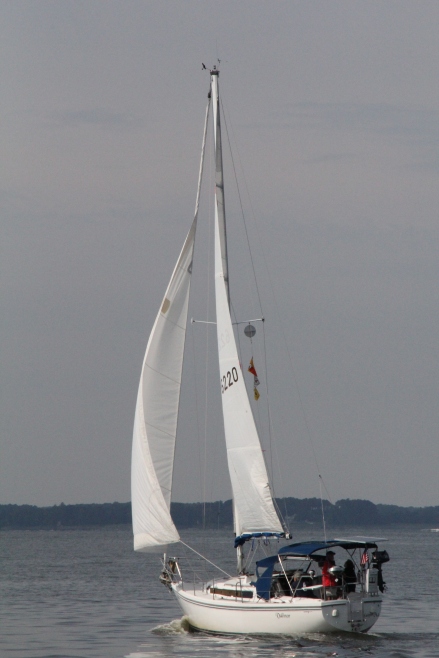 In the summer of 2011, nineteen boats ranging in size from 27 to 44 feet joined in a rally to circumnavigate the DelMarVa peninsula. This cruise is often the first opportunity for sailors to get some off-shore and nighttime sailing experience. The conditions, from sea state to watch schedules can be strikingly different from the more common cruising on the Chesapeake Bay. 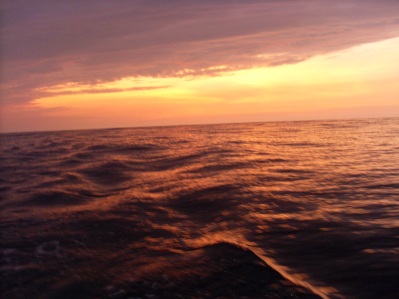 Off shore from Ocean City

Plans are now underway preparing for a similar cruise – this time going counter-clockwise. Next June we will head off from Annapolis on an overnight to Hampton, then off-shore to the entrance of the Delaware Bay at Lewes, up that Bay through the C&D Canal and back to Annapolis. For those interested, check in and follow the planning at http://www.delmarvarally.com/ .

It seemed a good thing to make one of the last sails this season with a fellow skipper from last year’s DelMarVa Rally. Bob skippered his Pearson 31 – Dorielle – in the same group of under 35ft  boats that Valinor sailed with.  Bob sold Dorielle, and  we’re planning on joining forces on Valinor for the 2013 Rally.  A short day sail on Sunday was a great beginning………and turned out to be the last sail of this season. 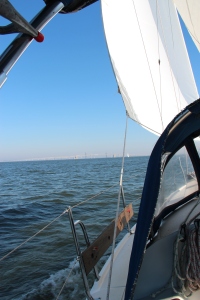 On a nice starboard tack

Winds were light and variable, but enough to enjoy a pleasant sail. Lots of other boats were out chasing the wind, and appreciating a beautiful day on the water. 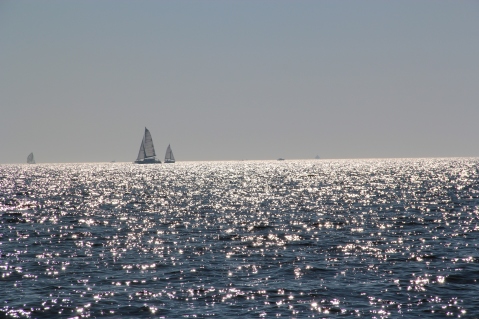 Love the way the water sparkles

Monday dawned with little or no wind and we chose to pass on another day sail rather than wait till the afternoon which promised increasing winds.  Instead we set about the task of preparing the boat for winter – “winterization” is such an ugly word.

With Bob’s help, we got the sails down and dropped off at the loft for repairs. 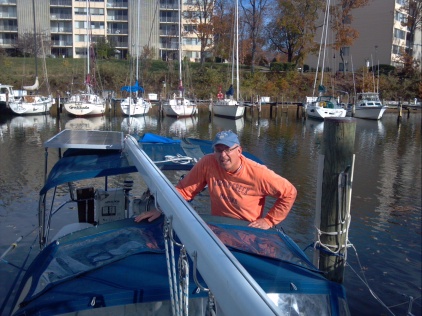 A little help from a friend

The rest of the work will wait till next week….

So it is with the sailing season, when you can’t go south as many of our friends are doing. Though it’s not quite over and another sail or two may be possible, the antifreeze is on the boat in preparation and assorted gear and supplies are being dragged grudgingly home.

Today I’m sitting on the boat in a borrowed slip waiting for the gusting winds to abate so I can move back to my own slip. TS Sandy managed to take down a tree that grazed the front of the boat, and a second ‘at risk’ tree was taken down in anticipation of its falling too. Otherwise we all weathered the storm with minimal or no damage.

In retrospect, it was a great sailing season. In seventeen sails (day sail or over-night) I logged about 1,000 nautical miles. What’s better is that well over half of that was sailing, not motoring – a much better average than previous years.  Several sails were with SOS crew and others solo with CCYC. It was a good year for building single-handed sailing skills and confidence. That was especially true for an extended 10-day sail with a friend from Maine that covered over 200 nautical miles. Most of these sails are reported previously on this site.

Stay tuned for more news from the water, maybe even another sail or two!

Here’s a brief look back in picture…..

May DNR cruise and pig roast

In June we watched the Blue Angels perform over Baltimore Harbor

In July it was a sail to Solomons, down past the Dominion LNG port..

.. and a lobster feed with CCYC

August broughta pleasant evening at anchor in the Rhode RIver

In September we took a bit of a pounding ..

.. but the next day broke clear.

Another circle raft in October with SOS

A great evening in Cambridge with friend Roger from Maine 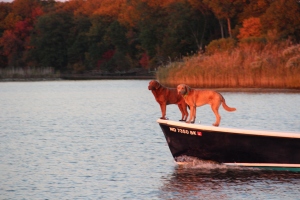 Had passing company while at anchor in the Corsica River…..

A fun way to see the end of the season coming….