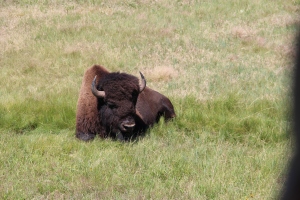 We will be back! Two weeks in Custer was terrific, but not long enough. The town was great, people were friendly, and we arrived in time for Gold Rush Days – which meant another parade as well as in-town festivities! Don’t miss the Buglin’ Bull restaurant…

In no particular order (below,) I’ve included a few pix and brief descriptions from the highlights. Beginning with the end of our visit, we drove to Deadwood, just north of Custer through some very pretty Black Hills NF country. We met friends from my working days at the Iron Horse Inn.  The Inn has a particular connection to our family since it was owned and operated by our son-in-laws mother’s parents (the Wagner family). 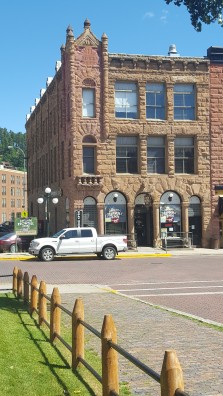 Seems the geology of the Black Hills is such that it contains many caves. In particular the Jewel Cave and Wind Cave.  We made the underground trek through part of the Wind Cave which is noted for its unique ceiling box structure unlike the usual stalactites. An hour and a half underground was sufficient, so we passed on the Jewel Cave. Something left for the next trip. 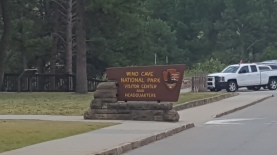 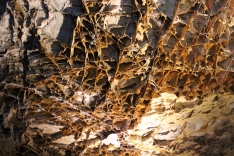 A Balloon Fest was part of the town’s celebration…we watched from lift off to touch down. With 10 balloons, it provided a sampling of what we expect to see at the Albuquerque Balloon Fest in October. 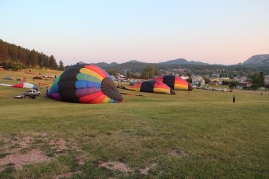 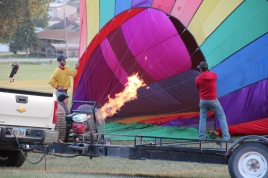 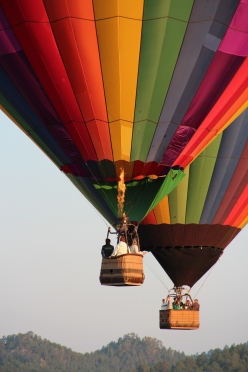 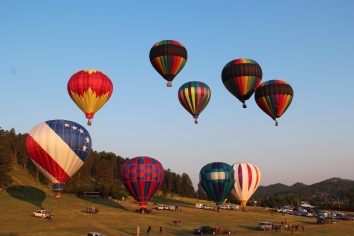 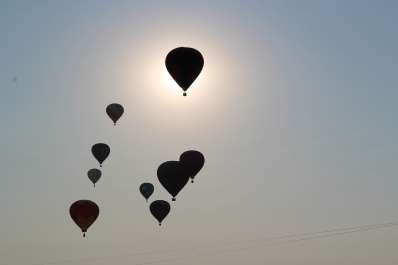 We were fortunate to have reservations at the Wagon West RV park and 7th Calvary Café. Can’t say enough good things about the Park or the Café…. super friendly owner/staff, delicious food – don’t miss the breakfast! And, a view out our front window that we never tired of. This was the site of General Custer’s encampment, and is so noted on the monument just across from us… We had many pleasant evenings and mornings watching the deer feeding, and the fawns playing, in the field in front of us. 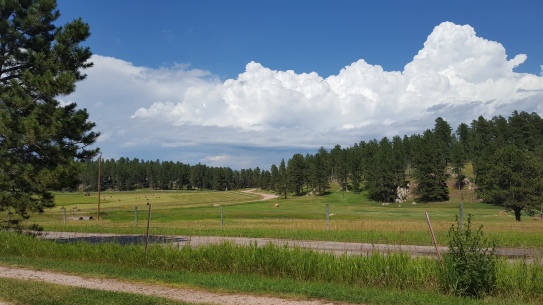 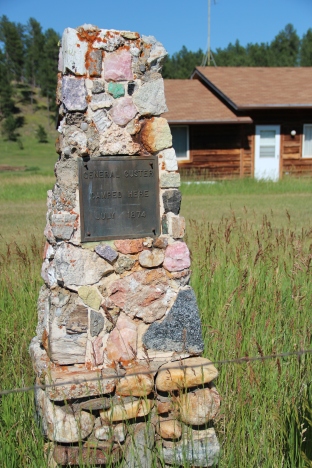 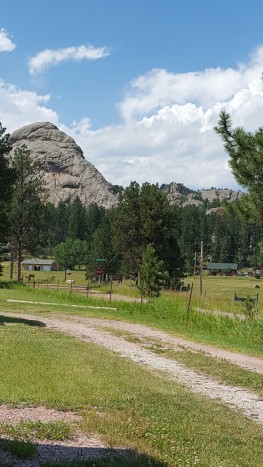 What to say about the donkeys? They wander wild in Custer State Park where we spent a lot of time wildlife watching.  That they wander wild, doesn’t suggest the degree to which they are friendly!  Stop the car, get out, and you will have a dear friend looking for a pet – or a scratch behind the ear! 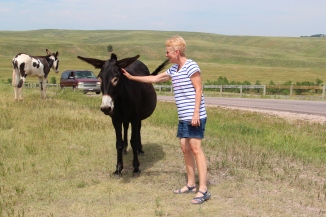 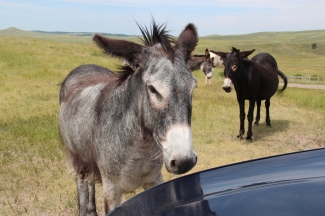 One of several day trips took us around the Needles Loop – by car NOT by RV – a beautiful drive and spectacular scenery of rock formations, vistas and narrow rock tunnels… one way and about wide enough, tall enough for a car or pickup truck. 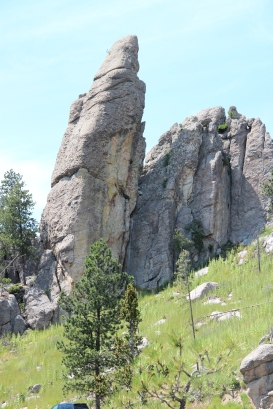 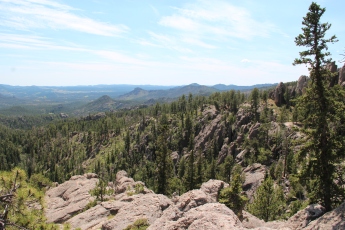 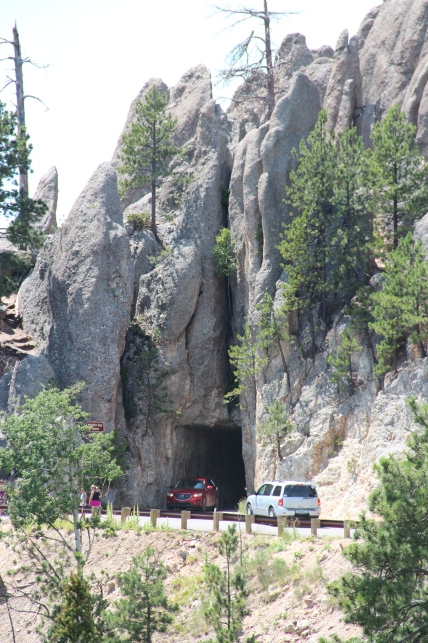 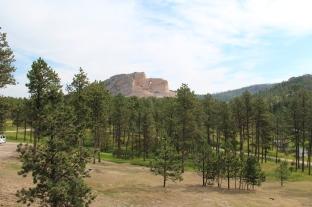 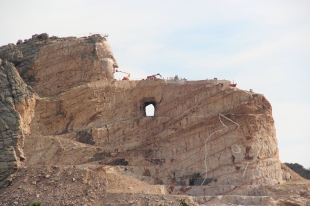 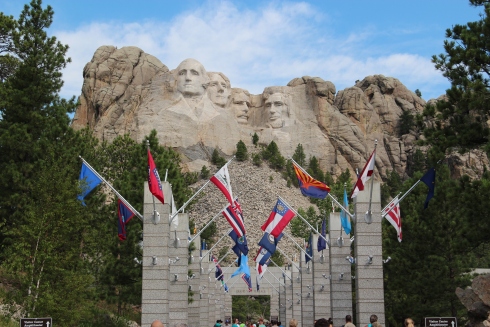 Coming back to Custer State Park – it wouldn’t be a visit without time spent watching the Bison. Now, I’d rather not be the guy on the motorcycle… but they passed him by without incident – lucky man. These are wild animals weighing up to 1,200 lbs. And mating season was underway. We watch old bulls fighting and chasing the younger ones out of the herd.  Females were tending calves, some of whom were still nursing. What a great time to be at the Park! 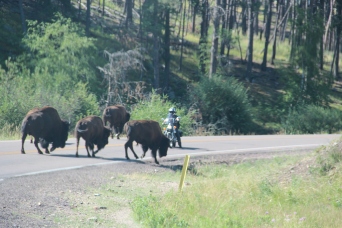 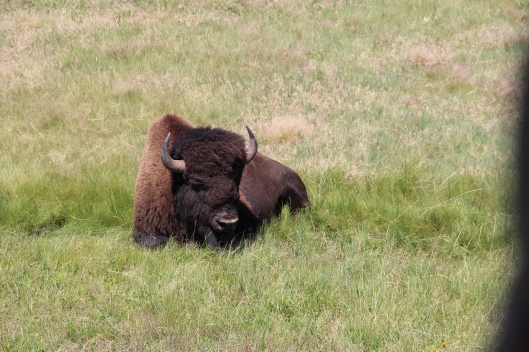 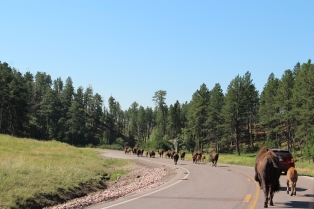 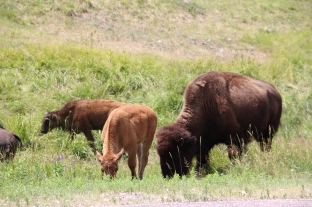 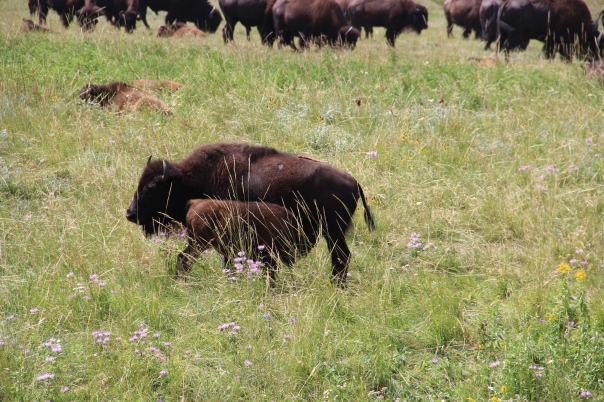 As I noted at the beginning … We will for certain be back!