We should soon put 2020 in the history book and find our way out of what has been an especially challenging year on so many fronts.

In part, because of the virus and some pretty inconvenient weather systems, this has also been a very challenging sailing season. Add to that some ongoing repair/improvement efforts on a newly acquired boat (late 2019). My enrollment in Spinsheet’s Century Club challenge proved overly optimistic. Not nearly as much time was spent on the water as planned. Even so, I managed to break the 50 day mark …..

First, early in the season I moved the boat to a new location at Maryland Yacht Club on the Patapsco River. It was a friendly and well-equipped site with a very generous sized slip and good marina neighbors. 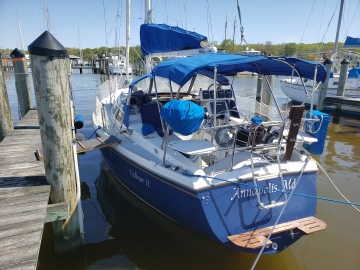 On the down side, it was a solid 4+ hours sailing time to the Annapolis area where many friends are based and closer to my very familiar cruising waters. On the up side, it gave me opportunities to try my hand at some fun racing. Even a grand-daughter got a chance for some racing lessons at the helm of a friend’s boat.

One such race was cut short abruptly by a broken steering cable – right at the start line. It offered a little excitement and an opportunity to test out the boat’s emergency tiller system.

This new interest in racing led me to enter a novel Annapolis-based event, the ‘2 Bridges Fiasco’. This was the first year for this race which was patterned after a regular San Francisco event. It was perhaps the highlight of the season. We had good winds,10-20 mostly, and I scored an assist from very experienced crew. 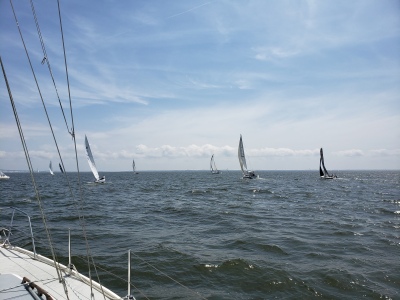 That experience paid off given the 130+ boat fleet, and the staggered start all of which would have otherwise been a bit stressful. We managed a respectable finish in the middle of our class – not bad for a 34ft cruising boat. We topped 7kts and put the rail in the water a few times.

Even with the virus restrictions, the Club managed a few overnight cruises with small rafting groups in some lovely Bay anchorages. 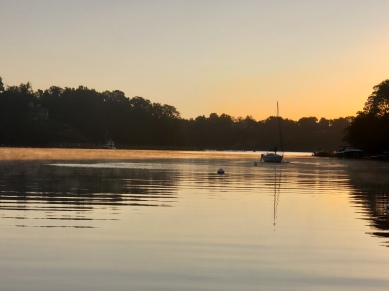 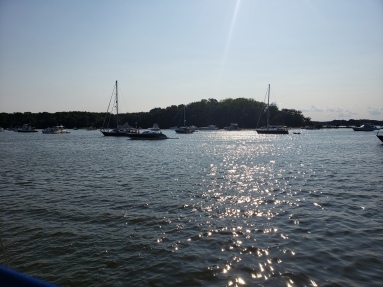 For assorted reasons, I made several trips down Bay to Annapolis. One of those produced a record time with favorable wind and tide making for a really fun sail. Sadly, the usual weekend raft ups fell victim to the virus constraints.

It’s now mid-November. I’ve relocated the boat back to Annapolis at my former marina in preparation for some over-winter work. The process of setting her up for winter is underway, but final winterization is on hold pending the chance for a few more day sails. So, hoping for some moderate, breezy days and friendly crew to share some bittersweet time on the water. Barring a change in current plans, Valinor II will have a new skipper by next season. Stay tuned for new adventures………