For those of us from the north, you could hardly call this winter, but that’s what the calendar says. The coldest day was last week when temps dropped into the low 60s – and we got a couple days of rain. Otherwise temps have stayed in the 70s to low 80s……..  Since arriving in mid-December, it has been great fun getting to know the town, and Key West’s unique culture.  Especially so because good friends here have been my tour guides – lots to see and do!

Otherwise known as the Conch Republic, Key West is an island town with a bit of everything for both tourists and residents.  Mobs of pelicans inhabit the town, 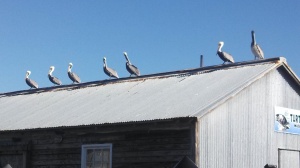 And chickens are afforded protection as descendants of early Cuban fighting roosters.

Hemingway wrote many of his well-known books while living there, and apparently ‘collected’ cats at the same time. Several generations later, the cats are well cared for and prowl the compound at will.

Arriving at Christmas time provided the opportunity to see all the many spectacular decorations around town and experience some of the festivities.

Good restaurants and live music abound, especially along Duval Street – tourist central. Here’s a small sample of some of the places and events I’ve enjoyed… so far. A wonderful French croissant café; the Garden Hotel jazz and wine tastings 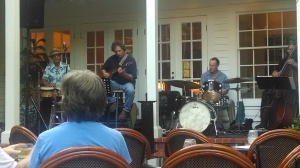 ………McConnell’s Irish pub; the Green Turtle right at the harbor where I park my dingy; Aqua Idol night club with its karaoke nights and Drag Queen shows; Salute’s restaurant for New Year’s eve with a local group of friends, then there was the New Year’s pirate drop……

………….and live stage plays at the Waterfront and Red Barn theaters.  The annual Daschund Walk and small pocket parks add to the diversity and character of the town. 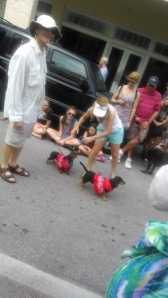 So, what about the sailing? Well, first I’ve been kept very busy with all the activities – and what a great way to experience a new place. Second, it seems the polar vortex that blanketed much of the country with bitter cold, sent strong winds and rain this way. Winds in excess of 30kts have been frequent since I arrived – enough so that I moved Valinor into the marina for a few days to get her off the exposed mooring. One sailboat just north of here got caught in 40+kts and was blown outside the reef. The solo skipper was picked up from the sea in 10-12ft waves by the coast guard. Hopefully it is now settling down to more normal conditions in time for Race Week that begins this coming weekend.